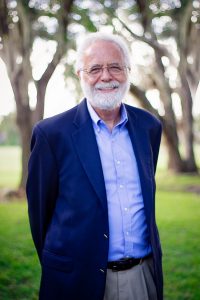 Randy was born in Loveland, Ohio, the youngest of four children and the son of a carpenter and a school teacher. Nurtured as a child in the Loveland United Methodist Church, he lived in Loveland until leaving for college. Since Loveland was a Cincinnati suburb, he became a great fan of the Cincinnati Reds.

Still thinking that God would have him eventually serve in a missionary position, Randy assumed the pastorate of Hope Presbyterian Church in Bradenton, Florida, where he began to favor the Tampa Bay Rays. Randy pastored Hope Church for nearly 25 years. In that time God taught him much about ministry and even more about God’s unfailing and unfathomable love and grace. This is the message he brings to Covenant Presbyterian Church, where he has been pastor since 2010, and to the Oviedo community. Randy is also the author of Something Worth Living For: God, the World, Yourself, and the Shorter Catechism.

Schedule Coffee with Randy or Ask a Question